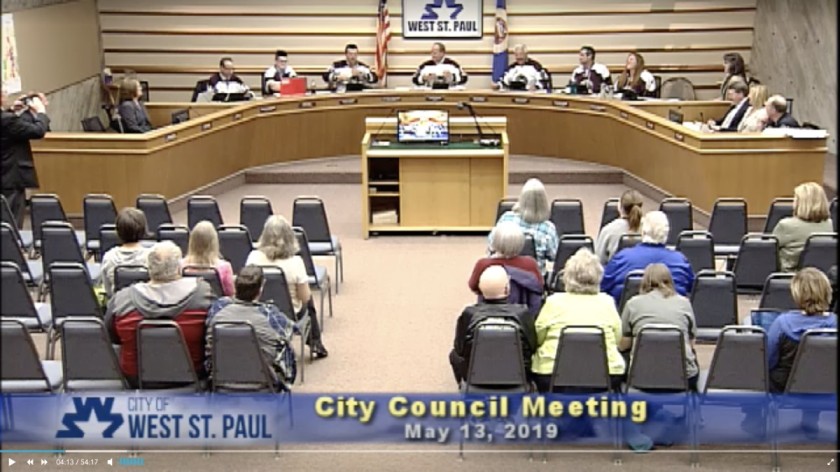 There was a slim agenda for last night’s West St. Paul city council meeting, though there were still some important milestones and interesting things to note. Here’s our recap:

“There was really only one winner—Neighbors, Inc.”

During the citizen comments, a group of 20 women from the Women of West St.Paul (WoW) stood at the podium to mark the one-year anniversary of the group’s formation. On May 14, 2018, more than 150 people crowded the city council chambers and women addressed the city council for more than an hour and a half in response to alleged sexism and harassment at the previous meeting. They also raised over $2,600 and a Jeep full of feminine hygiene products for Neighbors Inc.

“We have so much more community now than we did a year ago. Women and nonbinary folks came together, but we also had the support of a lot of great male allies too. … It turns out people care.”

Over the weekend, the Women of West St. Paul celebrated with a First Anniversary Pad Drive fundraiser at Dunham’s featuring the band Hot Brockoli and a special guest performance of the “West St. Paul” song by Carolyn Swiszcz. They again raised money and accepted feminine products for Neighbors Inc.

“We should have been here a lot sooner. But we’re here now. … Former Mayor Jenny Halverson indeed struck a match for a controlled burn when she said, ‘This will not be forgotten, folks.’ And it won’t be. Because of her example, WoW is here.”

A resident spoke during citizen comments about a problem property on Humboldt Ave. and complained about the lack of response from the city. The resident described physical assaults her child has witnessed, catalogued more than 150 different cars visiting the house since November, and noted the SWAT team showed up at the house in a story that made national news. That incident included a six-hour standoff with a man accused of raping a 4-year-old girl (most news stories describe the suspect as a “St. Paul man”—there’s no indication if the suspect lives in the West St. Paul home or just tried to hide there).

“I feel your pain, I’m really sorry that you have to go through this,” said Council member Anthony Fernandez, “But—and I know you don’t want to hear this—but we have to play by the rules.”

Mayor Napier and Council member Fernandez both referenced a similar problem with property on Logan Ave. that the city ultimately purchased in 2017 after a five-year struggle.

“I will not put my children through five years of this.”

Some back and forth between the council, the resident, and Police Chief Bud Shaver—who is set to retire next week—showed some clear frustrations about the response and follow-up from the West St. Paul Police Department. That included allegations of sexism—that men on the block who called received swift responses, but women did not. Chief Shaver noted that his calls and emails are all recorded, so that’s a matter of public record.

It’s a little ironic that the Women of West St. Paul celebrated one year of advocacy in the city, yet it’s clear that issues remain. But some things notably have changed in a year.

The conversation ultimately ended with Mayor Napier defending city staff: “I don’t know what else to say other than you have to trust us that we’ll get this done.”

City council meetings are open to the public and generally held on the second and fourth Mondays of each month at 6:30 p.m. You can also watch this meeting online.