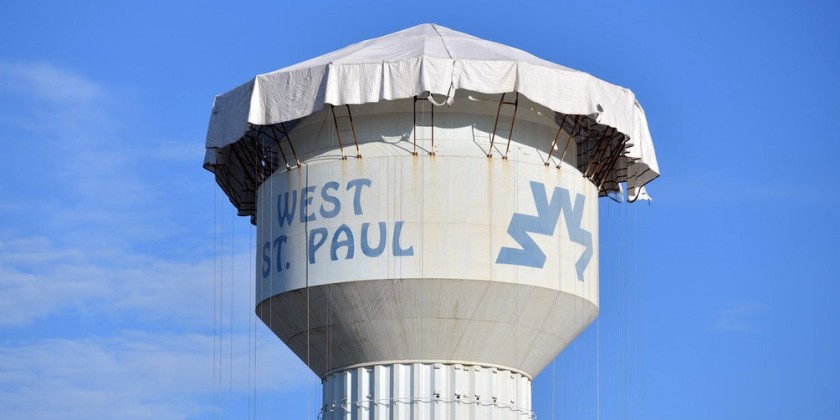 It’s hard not to notice the tallest landmark in West St. Paul—the water tower. Especially when it’s wrapped in a sheet. So what’s going on?

Saint Paul Regional Water Services (SPRWS) is refurbishing the water tower. They’re sanding it down to bare metal and repainting it, both on the inside and outside.

The project included lead abatement inside the water tower, and that goth color you’ve seen on the outside is the zinc primer that will help protect the metal.

When it’s done, the water tower will look mostly the same, just newer and shinier. The color and West St. Paul logo will still be there, though the slightly curved “West St. Paul” font will be replaced with a straighter and more modern version. (And no, contrary to the April 1 reports, it won’t feature chicken.)

Built in 1968, the West St. Paul water tower is 182 feet high and holds 500,000 gallons of water. That means we have the second highest water tower in the SPRWS system (Mendota Heights claims the top spot at 197 feet).

There’s a spiral staircase inside the tower, climbing 196 steps to a small platform. From there you can take a ladder through a pipe in the tank to a hatch on the roof. And then you have an incredible view:

When properly cared for, a water tower should last 100 years. But demand has increased a lot since the tower was built in 1968. These days it generally takes between two and a half and five hours to drain the West St. Paul water tower.

That’s why SPRWS wanted to add a second water tower back in 2015. But one of the proposed sites—Garlough Park—drew intense opposition. The idea was shelved, but West St. Paul could still use an additional million gallons of water capacity.

Increased capacity would give the water system more reliability and backup—helping to avoid a repeat of 2012 when a storm killed the power and the city was without water for 24 hours.

During the refurbishing project the water tower has been offline and the city served by constantly running the pumping station.

Work on the water tower is now complete and West St. Paul has a shiny, new-looking water tower ready to go.

(Thanks to Issac Afwerke with SPRWS, Chris Wolfgram and Cory Bednar with SEH, and Andrew Kubista with Osseo Construction for the insights and access. Thanks to Andrew Kubista and Carolyn Swiszcz for pictures.)