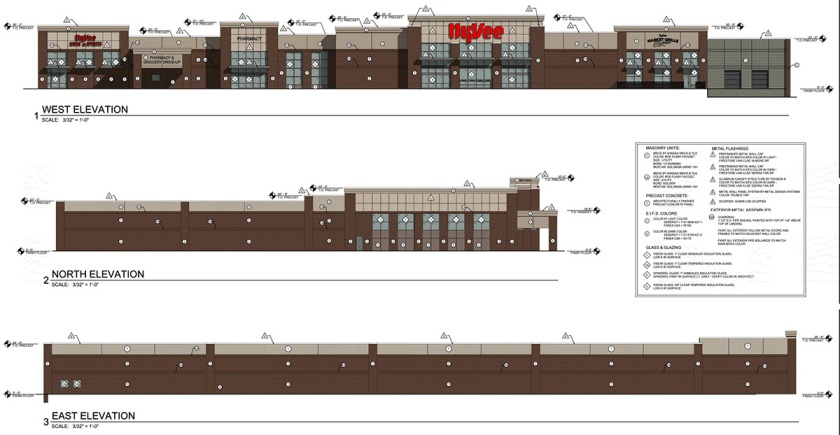 The West St. Paul YMCA has sold their property on Thompson Ave. to the Hy-Vee grocery store chain. The YMCA will be relocating (not closing) and Hy-Vee will begin construction in 2020. (See the latest update on this developing story.)

The YMCA has been exploring options to refurbish or replace their 50-year-old building or relocate for years, including potential partnerships with the city of West St. Paul and ISD 197. In early 2019 they sold to Hy-Vee.

West St. Paul has been working with Hy-Vee for roughly four years to bring them to the city. The 68,400-square-foot grocery store will include a gas station, sit-down restaurant/bar with outdoor seating, wine and spirit store, and a grocery/pharmacy drive thru pickup.

In addition to the YMCA property, Hy-Vee is acquiring the vacant lot south of Mister Car Wash to have access on Robert Street.

The project also includes a realignment of Crawford Street to accommodate a tunnel under Robert Street for the River-to-River Greenway trail.

While initial reports said construction would begin in the fall of 2019, and then June 2020 in conjunction with the River-to-River Greenway Trail tunnel, and then maybe 2021 with more tunnel construction—the timeline is anybody’s guess.

An Aug. 30, 2019 Star Tribune article reported that Hy-Vee is switching to smaller stores and delaying construction of larger stores, possibly including the planned West St. Paul location. City officials dove into the Facebook comments to correct the record, noting, “The early version of this article was published online with some incorrect wording. There was a reference to the West St . Paul development (as well as other locations) as being ‘on hold’. This is not correct. I’ve been in contact with our local developers, Hy-Vee corporate and the Star Trib today clearing this up.” An Oct. 14 Star Tribune article repeated that the West St. Paul project is on hold, but City Manager Ryan Schroeder said the article is wrong and Hy-Vee is moving forward in West St. Paul.

Everyone keeps asking what’s happening with Hy-Vee, and there’s not much of an update. Corporate is notoriously tight lipped, and a February Star Tribune article about two Hy-Vee stores opening this year in the Twin Cities listed West St. Paul among other sites with no updates.

But no updates doesn’t mean the project is dead or even on hold. They’ve already begun preliminary site work and applied for a permit to demolish the former Autozone building. All indications are that the project is still moving forward, just not as fast as anyone would like.

An article in the Star Tribune reported on new Hy-Vee locations opening and asked about the slowdown in opening new stores. Hy-Vee Chief Executive Randy Edeker said expansion would ramp up again.

When specifically asked about the West St. Paul location (and others), Edeker said, “We’re a little slower than we were almost six years ago when we opened our first stores in the Twin Cities, but we still have a lot of growth to come up here. You’ll see several more in 2022 and 2023.”

The pandemic has changed buying habits and Hy-Vee is shifting their strategy as a result. No word on what changes might be in store for the planned West St. Paul store or when construction will start.

So what’s the latest Hy-Vee update? Nothing. New City Manager Nathan Burkett said if he had to guess, it’d be at least a year. But he reiterated that it was just a guess and not based on any inside info. Hy-Vee has continued to be tight lipped and refuses to give a construction timeline.

There has been activity at the construction site, with more fill and site work happening, so that’s at least an indication that Hy-Vee hasn’t abandoned the project.

The Thompson Oaks wetland restoration project is moving forward in 2022, which includes rerouting some storm sewer lines from the Hy-Vee site. Dakota County has been in communication with Hy-Vee about that, and while there’s still no timeline on the Hy-Vee project, it might suggest Hy-Vee hasn’t completely abandoned a West St. Paul store.

We rely on your support to give these local updates.