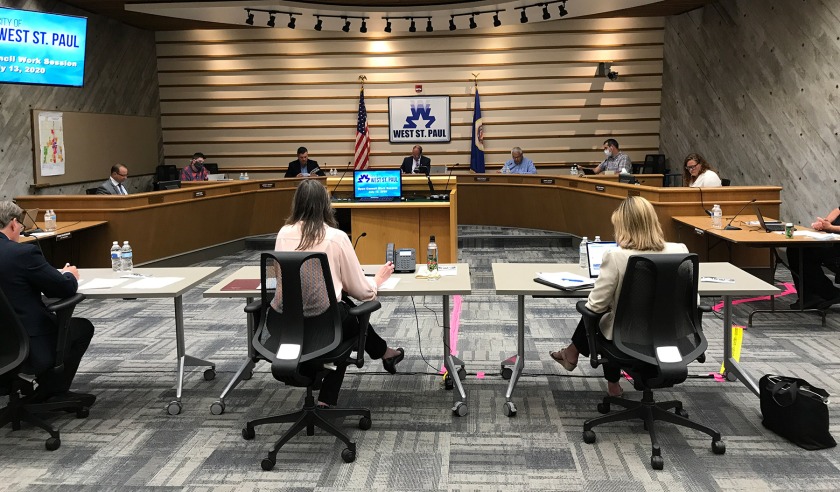 We rely on your support to provide these City Council recaps.

The West St. Paul City Council meeting covered a range of business including the first steps on a conversion therapy ban, chickens, council salary, a social media policy, and the big item, the proposed apartments at the former K-mart site.

For the first time ever, City Council work sessions were broadcast on TV and online to make them more accessible to the public. The Open Council Work Session (OCWS) and the Economic Development Authority (EDA) work session were both recorded and broadcast.

Public comments were also accepted via call-in, a feature available during virtual meetings at the height of the pandemic but now added to the limited-audience in-person meetings as well. Of the citizen comments, there were five in-person comments and six call-in comments.

Big thanks to city staff and Town Square Television for making this happen so quickly.

The big item on the agenda (again) was the proposed apartments at the former K-mart site by the developer Dominium. Here’s our overview of the project, including our (biased) take. Citizen comments included 10 people speaking out against the project, for reasons including too high of a TIF subsidy, concerns over bloated construction costs due to prevailing wage, and accusations that the developer is a bad landlord.

There’s not a lot of new information since this is the seventh meeting discussing the project, but the city’s Community and Economic Development Director Jim Hartshorn did give a little more history on the site. One item to note is that there was more interest in the site around 2016 when K-mart was going out of business. Around 10 developers looked at the site, but with the land lease arrangement and trying to do market rate apartments, nothing panned out. The land lease arrangement went away in 2019 when Signal Hills bought the K-mart site. Council Member John Justen argued that this should make the site more marketable. Hartshorn noted that he went back to half of those developers and there was still no interest.

For a helpful breakdown of how TIF works, you can watch the presentation from Stacie Kvilvang at Ehlers, the accountant firm that evaluates these projects for West St. Paul (it starts at about 55:00 in the EDA meeting).

The EDA work session didn’t include an official vote, but did give the Council a chance to give their general thumbs up or thumbs down on the project. A majority of members were in favor of the project, with Council Member Justen being the most vocally opposed.

Justen took issue with some of the numbers from Dominium, questioned taking only two bids for their general contractor, and challenged the cost increase due to prevailing wage.

“I feel like the excuse that’s being used is prevailing wage to punish us for enforcing a law that was on the books,” Justen said.

Council Member Wendy Berry also spoke out against the $5 million TIF, saying she was OK with the lower TIF amount and Dominium had to know about the prevailing wage requirement—”Nothing has changed,” she said.

The next step for the project is the Planning Commission on July 21.

City Council meetings are currently held on the second and fourth Mondays of each month at 6:30 p.m. You can also watch these meetings online: OCWS, regular City Council, EDA work session.