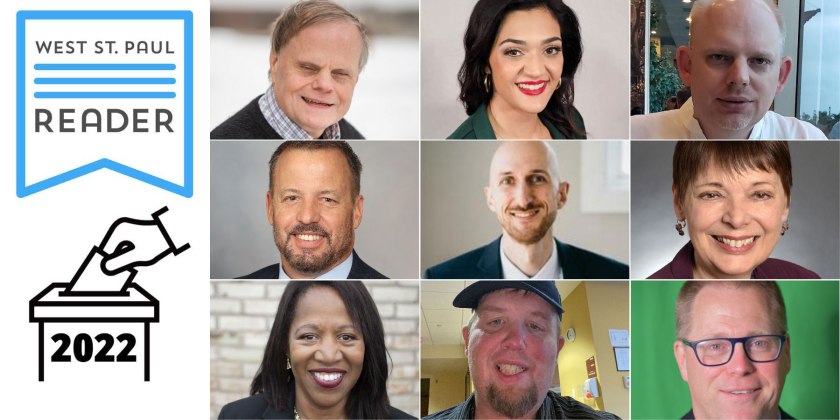 Local election coverage happens thanks to our generous supporters. You can join them and become a member of West St. Paul Reader.

This year’s election includes state legislature candidates for State House and State Senate to represent West St. Paul. Newly redrawn district boundaries divide West St. Paul in half, thanks to this year’s redistricting. The northern half of West St. Paul, roughly, is in District 65 and the southern half in District 53.

We’ve asked the candidates a series of questions to see where they stand on the issues. We’ll share one question and the responses at a time leading up to the general election on November 8. See our 2022 voter’s guide for more.

Previously we asked about top priorities, representing West St. Paul, the budget surplus, working across the aisle, and state funding. This time we’re asking about the partisan divide.

A number of divisive issues have polarized politics in recent years, including the pandemic response, false claims of election fraud, LGBTQ+ rights, race, abortion—and the list goes on. What do you make of these ongoing culture wars and what role would they play in your work as a legislator?

Here are the candidates’ responses:

Candidates for House District 53A

The creation of these so-called “wedge issues” was intended to create division among the electorate. This has led to unparalleled partisanship which in many cases has stood as a barrier to good governance. My mother taught us that “communication is a good thing.” As a result, I believe in order to be an effective legislator one must learn how to transgress artificial barriers and learn how to work with one another. Even if we at the end of the day end up with different positions, in the words of Hubert H. Humphrey “we have to learn how to disagree without being disagreeable.” Because the bottom line is in order to serve our constituents effectively we have to be able to reach across the aisle to find solutions. We must once again adopt a culture where compromise is not seen as a fault, but as an asset.

I believe that the government is way too big and in control of way too many things, that people seem to want to hire a politician to punish the Democrats (if they’re a Republican) or the Republicans (if they are a Democrat) and that leads to a ton of the contentiousness that we see today. I believe that if we shrink the size and scope of both the federal and the state government, end the Fed, and move to a more Libertarian society that this will end.

Given my career experience in; college teaching, lobbying, managing community relations for businesses, serving on city commissions, and teaching a community education course on Civics/American Government I see a GREAT need for improving the civics knowledge across the district, state, and USA. If voters have no understanding of how our governments (we have over 2,200 government entities in Minnesota) work or fail to work, nor have no idea where tax dollars are spent and for what purpose then everything we do at the state capitol or WSP city council is simply NOISE.

I’m proud to have been a voice for honesty, reason, and science during a time when those ideals were under unprecedented assault. On issues where the truth lies only on one side—such as the results of the 2020 election, or the seriousness of COVID-19—I will never compromise with falsehood. On issues where social justice is at stake, I will never compromise with racism or hate. On issues which divide us passionately by our convictions, I will advocate for the ideas of our community while recognizing that other perspectives are based in other values.

The pandemic response was greatly mishandled and those governing overstepped their duty to protect the liberty of the individual. Every American should have shared trust in our elections and that should be common ground as citizens. I’m unashamedly pro-life, I’ll always advocate for our mothers, and I believe those two things can both fully coexist. Skin color, race, sexuality? How about we focus on character, truth, trust, honestly, empathy, wisdom, and common sense. Returning to these fundamentals in addition to addressing the issues we’re facing in our community is where I believe the heart should be.

Candidates for House District 65B

Kevin Fjelsted did not respond to our questionnaire.

We are living through a crisis of accountability. Extremist politicians are running on platforms of hate and white supremacy, and they are often not held legally or even electorally accountable for actively spreading disinformation, voicing violent rhetoric, and advocating for policies that take our communities backwards, undoing decades of progress and movement. The alternative we offer is community-centered governance, where our candidacy is accountable to kindness and compassion, facts and science, and a movement of people.

Paul Holmgren did not respond to our questionnaire.

I have always been a strong advocate for human rights whether it is racial equity, LGBTQ+ rights, or reproductive rights. In a full democracy, these rights should be protected—and protected by legislation if necessary.

The general election is on Tuesday, November 8. Learn more about where and how to vote. You can also vote early with an absentee ballot, either by mail or by stopping at the Dakota County offices.

See our 2022 voter’s guide for more on the candidates and other races.

Thank you to the candidates for taking the time to respond to our questions.