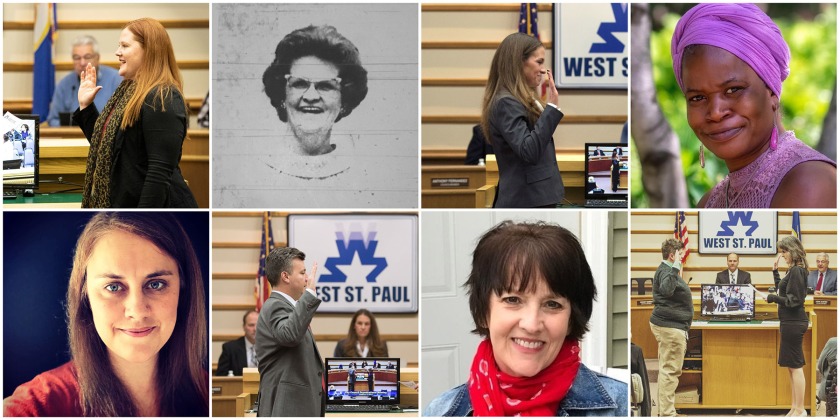 West St. Paul has a historic first this year with the first Black candidate for municipal office in the city’s history. So we’re taking a wider look at firsts in West St. Paul—turns out we’ve had historic firsts for the last few elections. We’ll start with an overview and then talk directly with some of West St. Paul’s firsts in separate interviews over the next few days.

Kimetha “KaeJae” Johnson is running for mayor this year, making her the first Black candidate to run for any municipal office in West St. Paul history.

The election for mayor is a three-way race this year, forcing a primary on August 11. The other candidates are incumbent Mayor Dave Napier and Jonathan Diamond.

“It is exciting to see a more diverse ballot, which will bring more perspectives into the mayoral candidacy,” says Napier. “The diverse candidate pool is certainly an important part of building a strong community.”

“There is nothing wrong with someone of any race running for public office, state office, or any other office,” says Diamond. “If people are going to make issues of that, my opinion is they have personal problems. I was raised that we all are equal. I really hope that people don’t have that in their minds when deciding on a candidate for any type of office.”

We’ve talked before about the lack of woman on City Council in West St. Paul’s history. Only seven women have served on City Council compared to 158 men. But this year there’s a woman running in every race on the ballot, something that has never happened before. Julie Eastman is running in Ward 1, Robyn Gulley in Ward 2, and Lisa Eng-Sarne in Ward 3 after being appointed in 2019. There’s potential for a female majority on City Council.

Both Johnson and Diamond are also renters, which is a constituency not often reflected in West St. Paul’s elected leaders. ‘Renter’ vs. ‘home owner’ is not frequently commented on in West St. Paul’s history, so it’s impossible to say if these are the first. But it’s certainly rare.

“There are issues renters face here,” says Diamond, “from getting repairs done to problems within the building. I know the city has dealt with issues in the past but [I] think they look the other way.”

Johnson has already made an effort to reach out to fellow renters by holding multiple campaign events at apartment complexes.

2020 isn’t the only year with historic firsts. Here’s a look at other firsts in West St. Paul history:

“West Saint Paul is positioned to do great things over the next several years and we need help from everyone in the community,” says Napier. “I think it is great to have so many people stepping up to run for local offices.”

Stay tuned for interviews with some of West St. Paul’s firsts.

We rely on your support to do local stories like this.

(Caveat: These are the firsts as near as I can tell. If I’ve missed any, I encourage anyone to correct the record.)