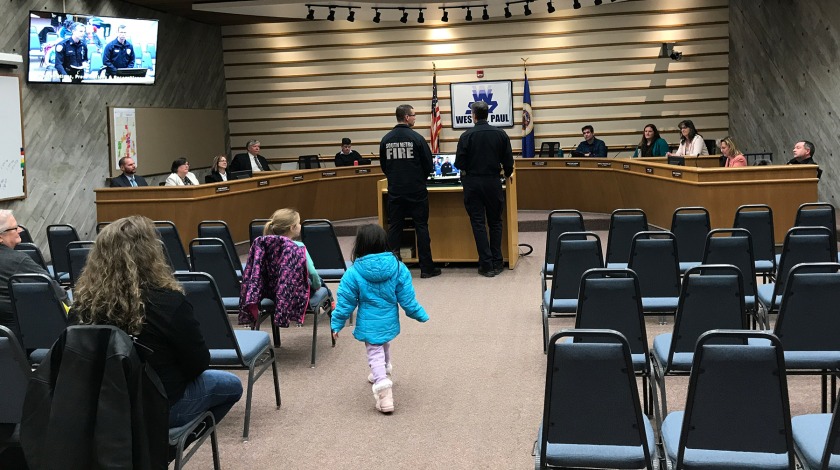 This week’s meeting happened on Tuesday instead of the usual Monday due to the Veterans Day holiday. Mayor Dave Napier attended a dedication of an honor wall at The Sanctuary honoring eight residents who are veterans. Council Member Lisa Eng-Sarne noted that West St. Paul is home to 1,094 veterans and she thanked them for their service. Eng-Sarne also pointed to West St. Paul’s Beyond the Yellow Ribbon committee and the services they provide to veterans.

If you’ve seen the U.S. flags and banners along on Robert Street and wondered who paid for them, you’re not alone. The South Robert Street Business Association (SRSBA) has paid for them, but it’s not a sustainable plan. During the OCWS, the City Council discussed the creation of a special business district along Robert Street to oversee these needs.

The plan would involve business and property owners being assessed and creating a committee to recommend how those funds are used. It would likely include beautification efforts (such as the flags and banners) as well as marketing to promote Robert Street and West St. Paul as a destination—similar to other business thoroughfares like Grand Avenue or Lake Street.

The idea is still in the very early stages and would require buy-in from businesses. SRSBA has been working with the Dakota County Chamber of Commerce to explore the idea and the Council seems willing to take the next step of hiring a consultant and fleshing out the idea so it can be fully presented to businesses.

City Council meetings are open to the public and generally held on the second and fourth Mondays of each month at 6:30 p.m. You can also watch this meeting online.