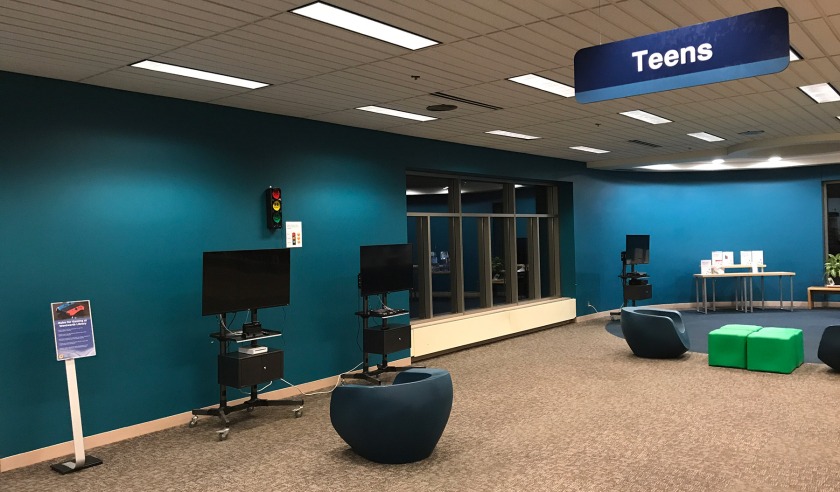 Looking for something to do over winter break? Head to the library. Not only does it have the endless stream of reading material you expect, but it can also be your gaming headquarters. Wentworth Library is testing video games in the teen section—not just checking out video games, but playing right there in the library.

There are three TVs set up with multiple game systems, including Nintendo Switch, Wii, PS2, Xbox, Xbox 360, and for a little throwback there’s even an Nintendo 64 (which originally debuted in 1996). More than 130 games are available, rated E (suitable for everyone), E10+ (everyone 10 and above), and T (teen under 18), which matches the library’s guidelines for video games that circulate.

So no Grand Theft Auto or Call of Duty, but Mario Kart, Zelda, Madden, Harry Potter and others are fair game.

If you are heading to the library over the holidays, be sure to check their holiday closings.

Teen gaming is a pilot project for Dakota County Libraries and hasn’t been tried at any other branches yet.

“Video games promote 21st century technology skills like creativity, critical thinking, and problem solving,” says Murray Wilson, the branch manager at Wentworth. “Those also build community and encourage collaboration among teens. It’s another way for the library to provide access to technology, as we do with 3D printers and other makerspace equipment.”

Wentworth Library will also be hosting video game tournaments for teens once or twice a month on Wednesdays from 6 to 7:30 p.m. It will take place in the large meeting room to the right of the lobby, so teens can drop in and challenge their friends.

Gaming is intended for teens and pre-teens ages 11 to 18, so no younger children or adults playing by themselves.

So if you’re an adult and want to get some vintage gaming in on that N64, you’ll need to rope in a teen to hang out and watch. Maybe they can read a book or something.