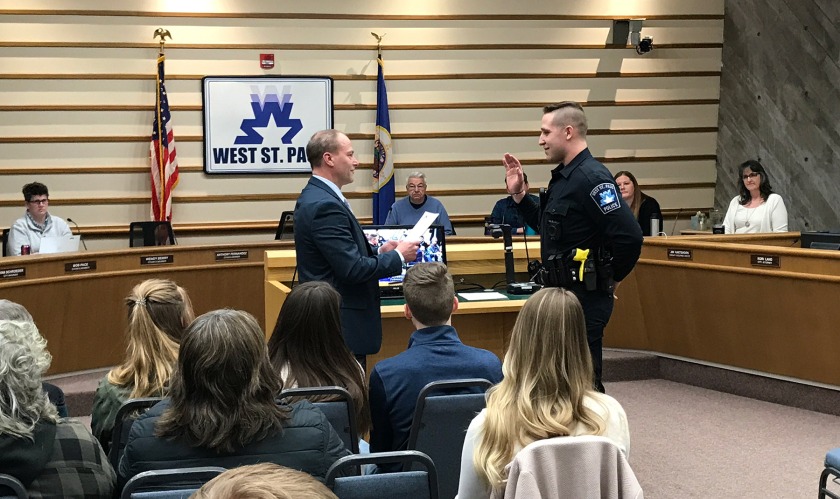 Thanks to Pace’s Tire and Service Center for their support. Family-owned since 1960, they specialize in professional, bumper-to-bumper auto care and repairs on foreign and domestic cars and trucks.

Business as usual for the West St. Paul City Council this week, with the swearing in of a police officer, honoring a Leap Day centenarian, progress on sidewalks/trails, and maybe a new Starbucks.

Yes, West St. Paul may be getting a second stand-alone Starbucks in the outlot of Cub Foods. Development is finally moving forward for these outlot parcels, with the potential of Starbucks, Xfinity, and Chase so far.

Original site plans were approved a decade ago, and due to changes in the plans they’ll likely go through the process again. But during the Open Council Work Session (OCWS), Council was eager to fast track the project and keep development moving, so look for it to come before Planning Commission in March and construction to begin this year.

There are still additional lots in the Cub Foods outlot, so there may be future development as well.

Sidewalks and Trails: Thompson and Oakdale

Council looked at preliminary options for sidewalks and trails on Thompson and Oakdale during the OCWS. These are the same proposals that came before the Parks and Recreation Advisory Committee earlier this month. At this point the city is using a Dakota County grant to study options and come up with estimates so they can apply for funding. It’s all about the money, and that pushes the timeline several years out (2024?).

The public will have a chance to weigh in during an open house on March 5 from 5 to 7 p.m. at St. George Orthodox Church.

City Council meetings are open to the public and generally held on the second and fourth Mondays of each month at 6:30 p.m. You can also watch this meeting online.