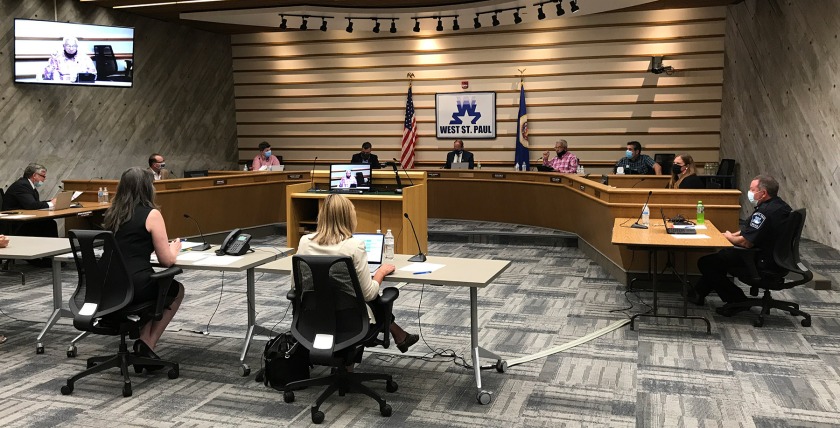 The West St. Paul City Council meeting made history in passing a conversion therapy ban. The city also relaxed a chicken ordinance, previewed the 2021 budget, and learned more about the Town Center One project (sorry, no brew pub).

The City Council banned gay conversion therapy, joining 20 states and more than 70 other cities. This issue was originally brought to the council by a resident, Connye LaCombe. She spoke back in November and again in March during an emotional plea, urging the city to make this change.

In March, LaCombe shared the story of her transgender daughter who suffered from bullying, depression, and attempted suicide:

“Our daughter was never subjected to conversion therapy, but suffered some of those effects anyway because of the abuse she was subjected to by ignorant people—and I count myself among those.  I should have known … Thank God times have changed and people are waking up to the fact that being LGBTQ is not a mental illness.  … Bullying is bad enough, but being put through the torture that is reparative therapy or gay conversion therapy is far worse and can lead to serious mental issues and even death.”

Tonight LaCombe was joined by 13 others making public comments in support of the ordinance. No one spoke in opposition.

“I am a product of conversion therapy, and it did not work,” said Kimetha “KaeJae” Johnson. “I suffered as a child. I had to go through horrific, horrific, horrific brain washing to make sure I didn’t identify as a bisexual. I’m telling you that is torture. I am pleading, pleading with you to pass this ban tonight.”

“If there’s ever been a time for West St. Paul to stand up and fight for these kids, this is the time,” said Joan Hutter.

“Conversion therapy is torture, I need to make sure people understand that,” Council Member Wendy Berry said. “We’d be like the fifth city in the state to pass it, and it’s real scary when West St. Paul tries to be the first to do something. … I want West St. Paul to join those cities and take the stand to say that this is wrong.”

“I’d be willing to take on the risk,” Council Member Anthony Fernandez said. “If you look at history, that’s how sometimes this stuff really does get solved.”

“I wish we’d done it 6 months ago,” said Council Member John Justen, urging no further delays. “I know it seems like two weeks is not important, but it is to me.”

Council Member Dick Vitelli urged his fellow members to listen to legal advice and make the ordinance stronger so it stands up to legal challenge. He referenced a sex offender registry ordinance that was challenged and failed. However, Land didn’t appear to be asking for a delay to strengthen the ordinance, but to give members more information to discourage them from passing the ordinance.

“If it’s unconstitutional today, why will that change in two weeks?” Council Member Bob Pace said. “I’m in Wendy’s camp on this one.”

“I’m totally against any kind of dingbat who would do conversion therapy,” said Vitelli. “I don’t know if I should say this or not—Michele Bachmann and her husband are dingbats, that’s what he did, was conversion therapy. I’m in total support of the ban, but I want to do it right.”

The measure passed 5 to 1, with Vitelli the lone ‘no’ vote.

“I want to thank every single person who has called in, written in, and spoken to us. This moment has required so many people to rip open their wounds and show them to us,” Council Member Lisa Eng-Sarne said. “We didn’t ask you to do that. I’m appreciative that you did. I’m sorry to our community members who have experienced this.”

West St. Paul ultimately became the sixth city in Minnesota to pass the ban, following Winona which passed it earlier that evening.

With much less debate and discussion, the City Council officially passed a change to the small farm animal ordinance that will allow more residents to have more chickens.

The relaxed ordinance increases the total number of chickens from four to six hens and reduces the distance rules that don’t allow chicken enclosures within 100 feet of neighboring dwellings to 25 feet with a 10-foot set back from the property line. Since many yards in West St. Paul couldn’t meet that 100-foot distance requirement, this will vastly increase the number of homes that can now have chickens.

The proposed apartment and retail development for the corner of Wentworth and Robert, known as Town Center One, came before the Economic Development Authority (EDA) work session for an update. According to the developer, the planned brew pub “never materialized” and they want to reduce the retail space from 5,000 square feet to 1,700.

The members weren’t thrilled with the loss of retail, but it didn’t seem to be a deal breaker. The bigger issue, at least for Council Member Vitelli, was that the project doesn’t include Granny Donuts and simply works around the building.

“Have you had any more discussion with the donut Nazi?” Vitelli asked. The developer tried and couldn’t reach an agreement with Granny Donuts owner Xuan To. The other members didn’t seem concerned with Granny Donuts. Council Member Pace said it’s a waste of time to keep trying.

The project, which does include a sizable TIF request, will officially come before City Council on August 31.

City Council meetings are currently held on the second and fourth Mondays of each month at 6:30 p.m. (though note that the August meetings are pushed back one week to August 17 and 31). You can also watch these meetings online: OCWS, regular City Council, EDA, EDA work session.