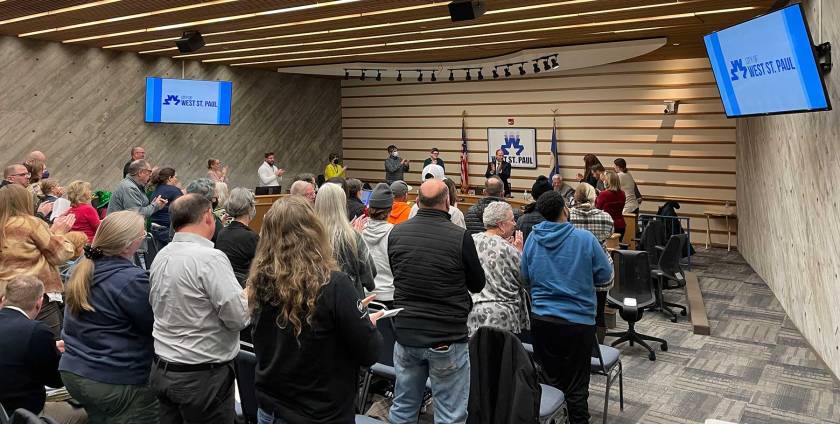 Thanks to Clover Montessori School and Jameson’s Irish Bar for their support.

Dakota County and Guild Services have proposed a mental health crisis center at the Northern Dakota County Government Center. This will replace an existing facility in South St. Paul with 16 beds for short-term treatment and add drop-in services.

The City of West St. Paul is buying the Hy-Vee/YMCA land. The plan was approved during the Economic Development Authority (EDA) meeting.

The initial plan was to bring in a developer to ultimately purchase the property, but the city ran out of time to finalize a deal. Instead the city is borrowing to buy the land, creating time to finalize the deal, and recoup any extra expenses in the sale.

What’s the plan? The city is still pursing mix of development including housing, a restaurant, and community space, as pitched to City Council in September.

What’s the hold up? The primary issue is qualifying for tax increment financing (TIF). The land isn’t blighted enough to qualify, mainly because the old YMCA building has already been torn down. They need special permission from the state legislature to do it. City officials are confident they can get that permission, but it’s going to take time. High interest rates and construction costs are also making the deal difficult.

Debate: Mayor Dave Napier and Council Member Vitelli were opposed to the plan, citing risk to the taxpayers. The remaining Council members were supportive and saw the upside of controlling the development and being able to bring a restaurant and public amenities. Losing control could risk those benefits, something the community has spoken against.

Vote: Ultimately, the EDA approved the purchase on a 5-2 vote with Napier and Vitelli voting no.

Council approved the final budget for 2023 and the corresponding property tax levy:

Other Items on the Agenda

You can watch the City Council, OCWS, and EDA meetings online.

Learn more about how city council works with our Guide to West St. Paul City Council.

Thanks to our members for enabling us to do these city council recaps. Join them and support neighborhood news in West St. Paul.